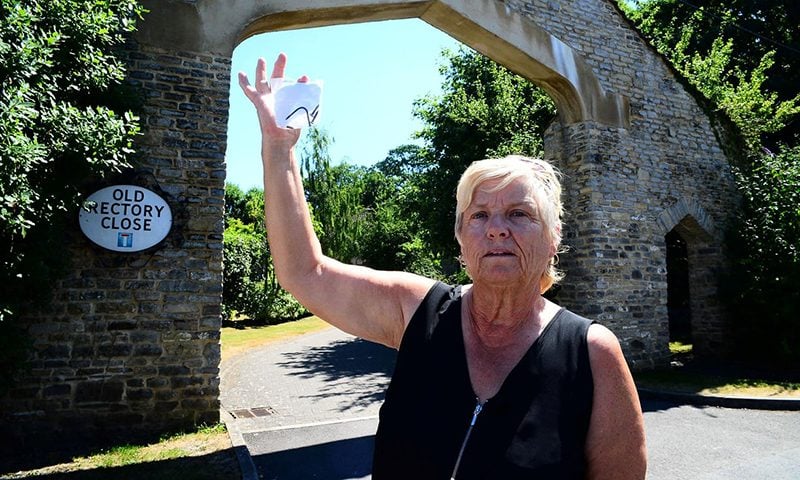 Parents dropping off their kids at a Somerset primary school are being targeted by nails stuck to the road, a local grandmother has claimed.

Janet Smith, 62, believes that parents are being deliberately targeted by residents who are angry at losing their parking spaces in Old Rectory Close in the village of Highbridge.

The quiet cul-de-sac, located near the East Brent CofE primary school, is used by parents collecting children at home time.

But parents claim that nails and screws are being glued upright onto the road, and that they’re the victims of vandalism.

Police say that they’re investigating the claims and treating them as criminal damage.

Janet drops her two six-year-old grandchildren off at the school three times a week, but recently found a screw in her tyre after parking in Old Rectory Close.

She said: “Nails are being placed at the side of the road. I went there on Thursday morning and got back into my car and turned around in the close and I thought, ‘What’s that noise?’

“I looked around and couldn’t see anything but when I got home, the wheel was in a different position I could then see it was a screw that was making the noise.

“Somebody’s going to have a nasty accident. The parking isn’t dangerous and nobody’s being blocked or anything like that. It’s straightforward legal parking and this is the way they’re tackling it.”

Other parents at the school have also found nails, and complained of punctures to their tyres and threats from local residents to stop using the road.

But one local resident, who didn’t want to be named, said: “During the school run, there’s no room to turn around and no room to park.

“People park on both sides of the road, so emergency vehicles couldn’t go down there.”

A spokesperson for Avon and Somerset police said: “We can confirm that we received a report from a woman that she discovered a screw in the tyre of her vehicle when she returned home after doing the school run.

“She believes this was deliberate. We’re treating the incident as criminal damage and are keen to hear from anyone who may have information.”