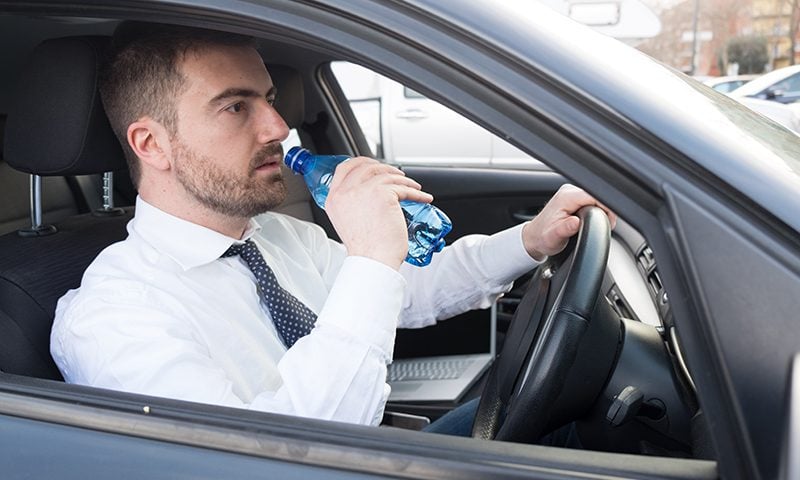 Dehydrated motorists are just as likely to make mistakes on the road as those who drink drive. Bet you didn’t think that would be the case!

With the warmer weather finally here, research by Loughborough University warns of the dangers of drivers not drinking enough water — but many aren’t aware of the symptoms of dehydration.

In a survey of 1,000 UK motorists, Leasing Options discovered that over two thirds (67%) of drivers fail to recognise signs.

These include slower reaction times, muscle cramps and loss of focus.

Scientists tested drivers who had drunk just 25ml of water an hour and discovered that they made twice as many mistakes as those who were properly hydrated — around the same as someone who had drunk the legal limit of alcohol.

Ron Maughan, Professor of Sport and Exercise Nutrition at the university, called driving while dehydrated an unrecognised danger.

He said: “We all deplore drink driving, but we don’t usually think about the effects of other things that affect our driving skills, and one of those is not drinking and dehydration.

“To put our results into perspective, the levels of driver errors we found are of a similar magnitude to those found in people with a blood alcohol content of 0.08 per cent, the current UK legal driving limit.

“Our findings highlight an unrecognised danger and suggest that drivers should be encouraged to make sure they’re properly hydrated.”

But the Leasing Options survey found that 37% of drivers are only drinking one litre of water a day, with 18% drinking even less than that.

Mike Thompson, Sales and Marketing Director at Leasing Options, said: “The hot weather can sometimes take us by surprise in Britain.

“Drivers may not think drinking an extra glass of water before leaving the house can affect their driving abilities, but it could decrease chances of an accident.”

Shocked by these statistics? Well you might be even more shocked at the number of drivers who are ill- prepared for driving in heatwaves too.