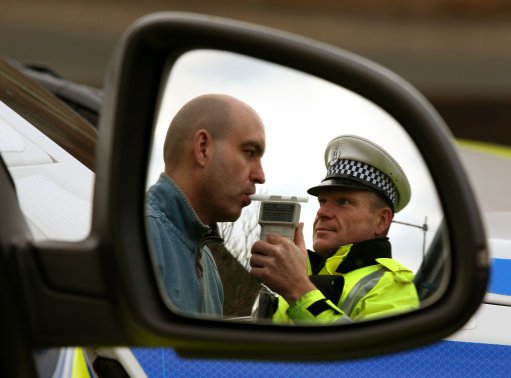 England, Scotland, Northern Ireland and Wales all had the same limit before last December – at 80 milligrams worth of alcohol to every 100ml of blood.

Then Scotland introduced a reduced limit of 50 milligrams worth of alcohol to every 100ml of blood.

Now a poll of 2,437 adults carried out by the Institute of Advanced Motorists (IAM) has found that a substantial majority of us want the other three countries to follow suit.

Almost half of us also want police officers to be given the power to pull over any motorist for random breath tests, the same survey finds.

Its poll found that drivers think such initiatives help to concentrate the minds of motorists. This is supported by the Department for Transport’s figures which show that drink-drive convictions drop over December, despite there being more tests.

Since Scotland brought in lower legal limits, findings suggest that they seem to be working.

For every five motorists prosecuted for driving with too much alcohol in their blood over Christmas 2013, there were only four in the same period last year after the new legislation was introduced. That’s a 19% drop, say Police Scotland.

Just the one?
This year, safe driving campaigns have revolved around the dangers of drivers consuming a second alcoholic drink at Christmas parties.

The THINK! initiative warns that doing this could double the chances of being involved in a fatal road accident.

And nearly a fifth of motorists aged between 18 and 34 admit they would think about consuming at least two drinks before driving during the festive season.

Sarah Sillars, the IAM’s CEO, says the group backs any initiative which makes heroes out of non-drinkers on festive nights out, ensuring that everyone gets home safely.

She says the new Scottish law changes appear to be driving home the “none-for-the-road” message with success.