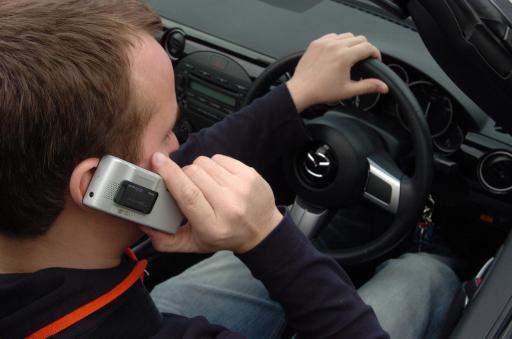 POSED BY MODEL. A man using his mobile phone while driving.

Can’t kick the illegal habit of using a hand-held phone at the wheel?

Well, obvious dangers aside, you now face a £150 fine under new Government plans – a 50% rise on the current penalty.

You’ll also get 4 penalty points on your driving licence instead of the 3 issued now. This will go up to 6 for lorry drivers.

Young drivers most at risk

You’re in the biggest danger of succumbing to the temptation if you’re a young driver, research continues to suggest.

This isn’t just because your lack of experience will require you to concentrate on the road even more than older drivers.

– use mobiles behind the wheel more than your older counterparts

– have nearly a 1 in 5 chance of owning up to texting every month, compared to only 1 in 9 older motorists

Brake also reports that shocking US studies show four out of five youngsters answer or make calls when motoring, and 72% use their phones to text.

Nope. Not when you consider in-car hand-held mobile phone usage is a danger to our lives as well as our wallets.

Did you know that this strand of anti-social behaviour was behind 21 road deaths last year alone? It also was a serious factor behind 84 serious accidents, according to the Department for Transport (DfT).  Besides the fines and penalty points, mobile phone use can result in a prison term if it contributes to a road fatality.

– 6 years: for a 31-year-old female motorist who used a couple of mobile phones and killed the driver of the car in front when she smashed into it

– 6 years: an Isle of Wight man, 27, killed a fellow driver when texting

– 5 years: a 36-year-old woman killed a cyclist in Fife, Scotland, when mobile phone-driving

The Institute of Advanced Motorists (IAM) says tougher fines won’t have a big impact if traffic officers aren’t there to police such offences.

The safe driving charity’s research and policy director Neil Greig is calling on ministers to up their numbers. New Ministry of Justice-led figures suggest he is right.

They show that the amount of drivers prosecuted for the crime have almost halved over a five-year period, despite other evidence suggesting widespread use.

Patrick McLoughlin the Transport Secretary calls the practice “reckless”. He wants us to look upon mobile phone use as badly as we do motorists who don’t wear seatbelts.

It won’t necessarily mean penalty points if you are caught in the act.
The new proposals suggests that the majority of us will get the chance to go on a course instead. This will help educate us about the sometimes horrific impacts of mobile phone-driving.