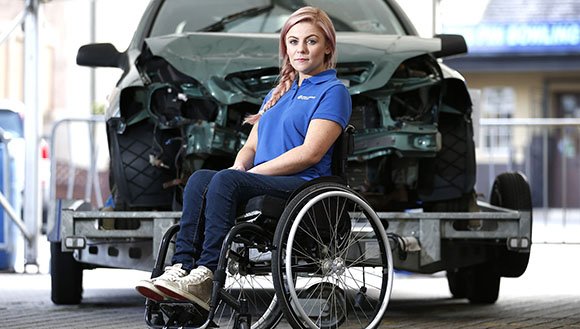 A brave young woman who was left in a wheelchair after a car crash has warned teenagers about the dangers of driving.

Laura Torrance spoke out about her experience of being injured in a life-changing accident at the age of 16.

Now 33, she gave a talk at the Streets Ahead Edinburgh Young Drivers event.

Road crashes are the biggest cause of death for young people aged between 15 and 19, with an average of 54 accidents a week in Scotland involving a young driver aged between 17 and 25.

Aftermath of crash ‘has not been easy’
Laura, from East Kilbride, South Lanarkshire, was a passenger of car being driven by a friend who had just passed his test in 1999.

The car took a corner too quickly and rolled into a field.

She described how she woke up in a ditch and was later told she had a severe spinal injury.

Laura said: “It’s not been easy. Life’s been a bit more challenging. Even still after 17 years I still get my odd day when things don’t go according to plan.

“This was not how I thought my life would pan out for me. It’s been challenging but I still do a lot of things I probably would have done if I hadn’t been in my chair.”

A lasting message
She now hopes her story will help teenagers while driving.

“My intention is to let people know that driving can be fun, as long they do it safely – wear their seatbelt, have the confidence to speak up if they’re in a car with someone they don’t feel safe with or is going too fast,” she said.

“Because they (the pupils) are seeing me and it’s a real-life story, they seem to get quite a lot from that, so my hope is the message will stay with them once they leave here.”

More than 2,000 pupils met Laura at the road safety event and were given the opportunity to try out a range of interactive activities highlighting the dangers of driving.