Rolls-Royce Sweptail: one of the world’s most expensive new cars 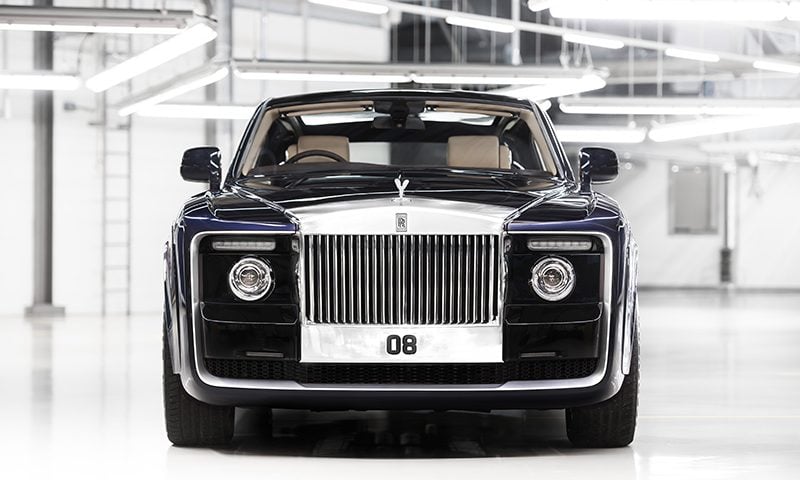 Rolls-Royce are known for their seriously luxurious motor cars, often featuring bespoke tailoring and accessories. But the new Rolls-Royce Sweptail is in a league of its own. And much like the Premier League nowadays, it’s seriously expensive.

Commissioned by an unnamed customer and costing a whopping £10 million, the new model is one of the world’s most expensive new cars. The mystery customer requested a custom-made glass roof inspired by their love for superyachts and aircraft – of which the customer is a collector.

Stretching the full length of the two-seater car’s interior, Rolls-Royce claims that it’s one of the largest and most complex glass roofs ever seen on a motor car. The bodywork also replicates the style of a yacht’s hull by wrapping under the car.

A spokesman for the manufacturer added: “It is a Rolls-Royce but like no other before.”

As well as the fantastical glass roof, the James Bond-esque Sweptail has concealed compartments to store the owner’s bespoke carbon fibre attache cases. To celebrate ownership, a chilled bottle of vintage champagne from the year of the driver’s birth and a pair of crystal flutes appear from a central console at the touch of a button.

Rolls-Royce Motor Cars Director of Design, Giles Taylor said: “It is a Rolls-Royce designed and hand-tailored to fit a specific customer.

“This customer came to the House of Rolls-Royce with an idea, shared in the creative process where we advised him on his cloth, and then we tailored that cloth to him.”

Aptly enough, the stunning Sweptail has been on display at a car show on the equally stunning shores of Lake Como in Italy.

And yes, it’s totally fine to be jealous.

Selling a car to save up for a Sweptail? Check out our handy buying and selling advice.