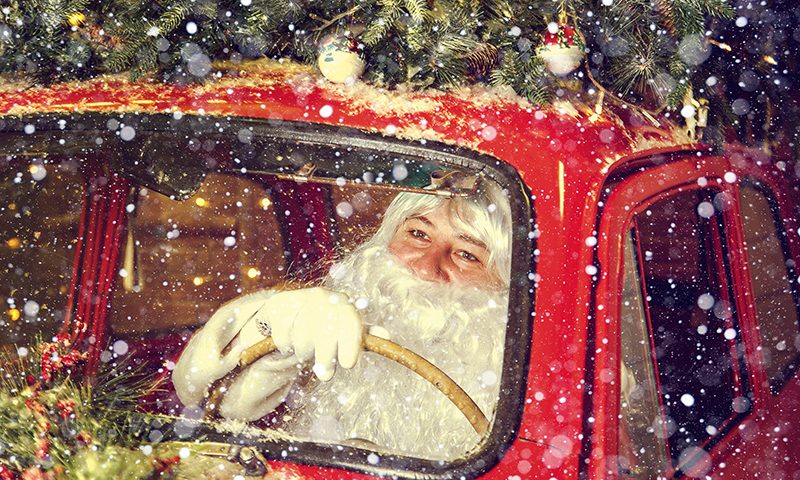 From checking the wheel tread to making sure your antifreeze is topped up, it’s important to be prepared for a long journey this Christmas. But planning the soundtrack to your wintery journey should also be high up on the list…

No drive home is complete without this Chris Rea classic that sums up the frustration of traffic jams while simultaneously feeling the excitement of getting home to your loved ones.

The 1950s sing-a-long classic has been played on every radio station’s Christmas playlist since it was released. Probably. It’s used in many festive movies and will undoubtedly stir memories of watching Home Alone 2 with the family.

Could any lyric sum up your drive back to your loved ones on Christmas Eve better than “I wish I was at home, for Christmas”?

This song has made an appearance in every Christmas top 20 since 2005 and is often dubbed the “most overplayed Christmas song of all time”. Shane MacGowan wrote the marmite-esque classic in 1988 as part of a bet with producer Elvis Costello that the band couldn’t release a festive track that wasn’t “slush”.

This upbeat seventies tune from the Beatles legend has all the tunefulness of the Fab Four but strikes a love-or-hate chord with fans of the band. As a firm favourite of DJs at many Christmas parties, it’s likely to trigger some fun memories, or maybe ones you’d rather forget…

This song has many a crescendo and having been played for more than six decades, we probably all know the words – to the chorus at least.

Guaranteed to have you singing along. Who cares what the other drivers in the traffic jam are thinking?!

Despite not mentioning Christmas in the lyrics, this wintery classic has become synonymous with the festive season and is sure to warm the cockles of your heart.

The slow caramel tones of Frank Sinatra will make you feel all warm inside and excited for Christmas; a feeling not too dissimilar to the one you get from drinking a gingerbread latte.

Despite being released in 1958, the vintage vocals on this track have earned it the award for the fourth most digitally downloaded Christmas tune ever.

Bob Geldof and Midge Ure wrote this classic in reaction to television reports of the 1980s famine in Ethiopia. Each year it serves as a timely reminder to give back at Christmas and appreciate what we have.

Although the Perry Como original is not to be sniffed at, this is a faster-paced version and Darlene Love’s gravelly tones will make you feel warm inside.

When Noddy Holder shouts “it’s Chriiiiiistmaaaaaaaas”, there really is no denying it.

Expected to be Christmas number one in 1984, it was pipped to the post by Band Aid’s Do They Know It’s Christmas? – a worthy winner. It’s the biggest selling single in UK chart history never to reach number one.

After battling it out with Slade’s Merry Xmas Everybody in 1973, Wizzard should have been number two in the charts. Instead the classic only ever made it to number four.

Whether or not you’ll admit it, everyone has been brought to their feet by this chirpy, cheesy favourite at some point over Christmas.

If you love the festive film, then the song is a must for any Christmas playlist. Slow-paced but well-aged, having been played every year since 1943.

Not one of Darlene Love’s most famous classics (Winter Wonderland fared much better in the charts), but is definitely a cheery number.

The will-she-won’t-she romantic tune has been around since 1944, and is a cosy story about a man trying to convince his love to stay indoors with him, rather than braving the cold journey home.

If you’re getting a bit too excited on the drive home, this poignant favourite is a good way of slowing down the pace.

Worried about tackling the icy roads? Here are our top tips to driving this winter.