‘Most unusual’ vehicle causes a stir on M25 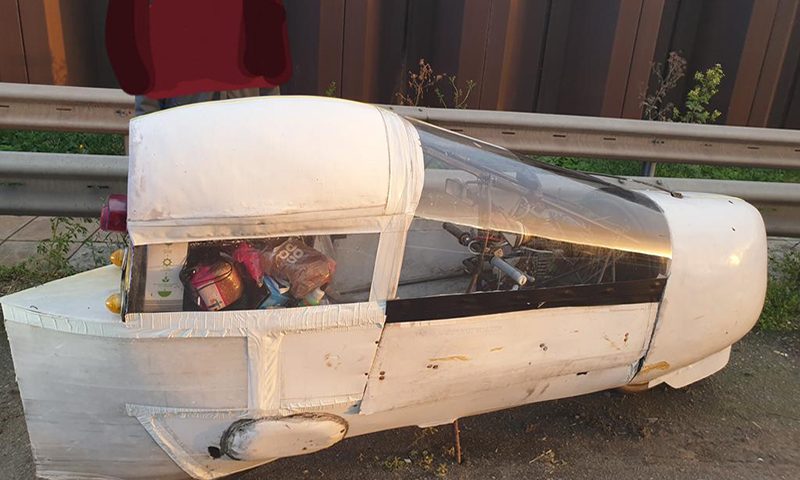 Have you ever seen a car made of fibre glass and duct tape? Neither had the stunned traffic officer who pulled over a homemade 3-wheeler cruising down the UK’s busiest motorway.

The car, looking something between a small boat and an aeroplane cockpit, caught the attention of a Bedfordshire officer who pulled it over for a roadside inspection.

On a closer look, the ‘car’ was actually found to be a motorbike inside a plastic and fibreglass shell. And yet, to the officer’s surprise, the bizarre vehicle was also completely legal for the road.

The traffic officer posted a picture of the vehicle on the Bedfordshire, Cambridge and Hertfordshire (BCH) Police’s Twitter page with a comment: “The most unusual vehicle I’ve stopped on a motorway in my 26 years!”

The car caused quite a stir on social media, described as being reminiscent of the Messerschmitt bubble cars popular in the mid-20th century, while others suggested the car reminded them of the 1980s Quasar motorbike.

But the story gets even more unlikely as the DVLA confirmed the vehicle is taxed, insured, and completely legal to drive.

Police confirmed via a somewhat confused Twitter post that the car was “all checked and in order”.

Not everyone is impressed by the vehicle. Concerned drivers have since launched a debate on the BCH force’s Twitter feed about the potential dangers of the vehicle, with one person commenting: “I wouldn’t be driving that thing on a motorway. Looks like a deathtrap!”

Another user, added: “That’s legal on our UK roads? A lorry would never see it. Wow.”

Sergeant Stephen Andrews from the Roads Policing Unit said: “This is certainly not a vehicle that is seen very often on our roads but after road side inspection we couldn’t find anything that would prevent the rider to continue his journey.

“The vehicle was keeping up with other traffic and didn’t cause any obstruction to other road users.

“The owner made sure that he fulfilled all the safety regulation as well as keeping the insurance, MOT and tax in date.”

If you’re a fan of the weird and the wonderful, why not check out our blog on the 10 most bizarre road signs from around the world?