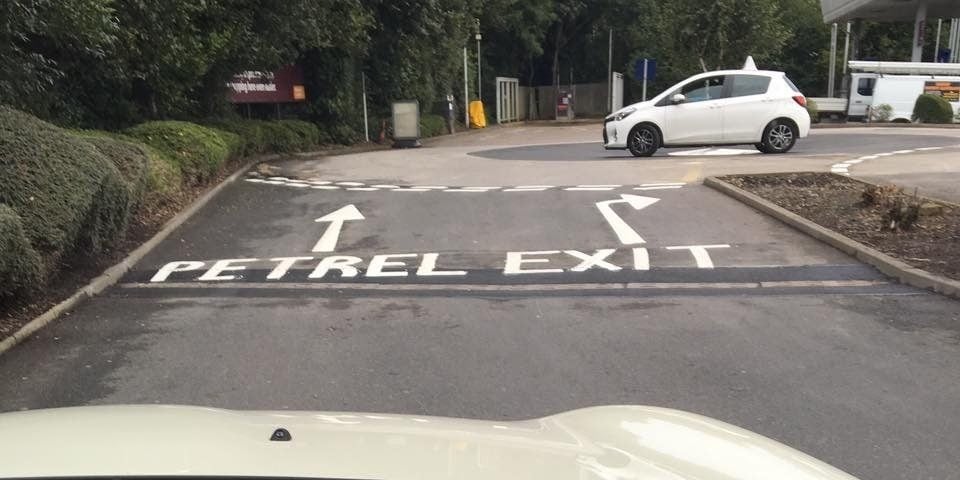 Everyone makes mistakes right? One in particular fuelled smiles – and a lot of banter on social media.

You have to feel a bit sorry for the worker who misspelt the word “petrol” on a filling station forecourt.

Such a fuel!
Drivers approaching the pumps at Sainsbury’s in Doncaster, South Yorkshire, were left a little bemused by road markings apparently directing them towards a small species of sea bird.

The word “Petrel” had been painted in 3ft high letters on the tarmac.

Petrels are a type of seabird commonly found around the British coast.

The white letters have been painted next to the flawlessly spelt word “exit” and some perfectly drawn arrows.

A picture of the suspect wording was posted on Twitter with the comment “Seabirds straight ahead #YouHadOneJob”.

The blunder prompted mocking by social media users, who provided the standard definition of petrel as “a bird with a curved beak that spends most of its life flying over the sea”.

Sainsbury’s responded to the jibes with some lighthearted banter of its own with a spokeswoman saying: “We’re aware of this and correcting the misteke”.

Embarrassing error
Lessons have clearly not been learnt from a similar incident last month when a spelling mistake was made in road markings outside one of Cornwall’s best performing schools.

Instead of school, the word “shchool” could be seen in bright yellow in front of Truro High School, Cornwall.

In an ironic twist, all students who took A-level English at the school achieved A* or A grades this year.

Headmaster Dr Glenn Moodie, joked to the Sun: “If the road repair team need any advice on spellings in the future, we would be more than happy to help.”