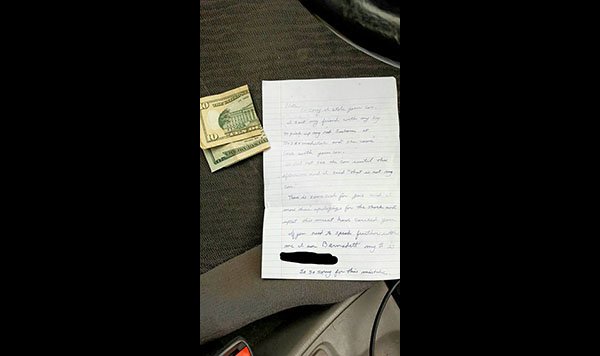 A Subaru owner in America had her car stolen by an accidental thief – only for it to be returned with an apology note and petrol money.

Erin Hatzi, of Portland, Oregon, awoke to find her car was missing from her driveway.

A chemotherapy nurse, Mrs Hatzi uses her 2001 Subaru Impreza to get to work every day, so she immediately called the police to file a report.

However, officers were confused by the theft, as CCTV footage suggested the thief wasn’t in a rush to get away with the car.

CCTV showed a woman slowly opened the door with a key, before spending several minutes texting and then driving away.

The following day, as Mrs Hatzi’s husband was opening their front door, he saw two police officers were in their driveway, along with the stolen car.

A woman was trying to explain to police that she had accidently stolen the car – thinking it belonged to her friend who had asked her to pick it up for her.

The officers, who had turned up just as she was returning it, were shown the note she was leaving for the car’s owner — along with $30 for the petrol money she had used.

The note said: “Hello, so sorry I stole your car. I sent my friend with my key to pick up my red Subaru at 7802 SE Woodstock and she came back with your car.

“I did not see the car until this morning and I said, ‘That is not my car.’ There is some cash for gas and I more than apologise for the shock and upset this must have caused you.”

The letter also provided the woman’s name and phone number.

“So, so sorry for this mistake,” she added.

Police have confirmed that keys for some older Subaru models are interchangeable.

“It’s like a bad sitcom that nobody would ever buy the story because it’s stupid and it makes no sense.”

What to do if your car is stolen