Is your number plate about to become illegal because of Brexit? 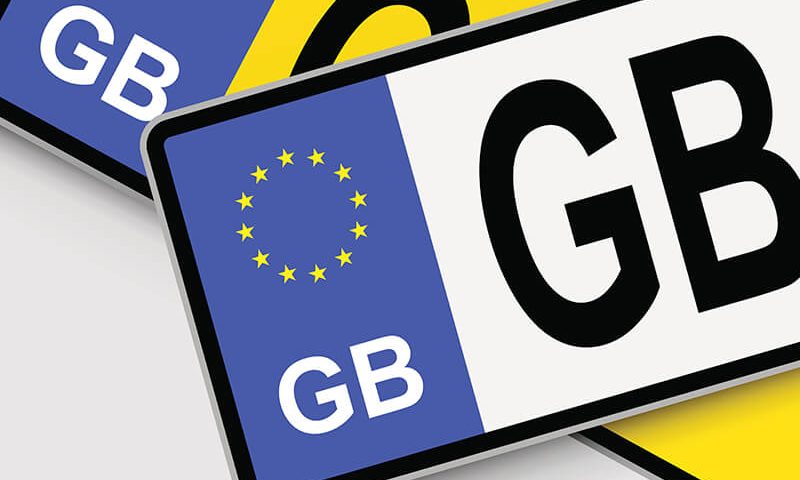 As if there isn’t already enough uncertainty around what a post-Brexit world might look like, the government has now issued a warning that should the UK leave the EU without a deal, the so-called no-deal Brexit scenario, it’ll have an impact on UK number plates too.

Is your number plate valid in Europe?

If you’re one of the hundreds of thousands of Brits who head to Dover or the channel tunnel to get to France, or anywhere else in Europe for that matter, for your holidays you now have another thing to think about before you set off.

Number plates displaying both the EU flag and a GB sign will no longer be valid in a post-Brexit world.

Instead, you’ll need to replace your Euro-plate with a number plate that just has the GB sign and not the EU flag.

Brits having to fork out for new number plates

If that’s not enough inconvenience for you, it’s also going to have to come out of your own pocket too.

However, for those of you remainers who want to hold on to your last bit of EU history, you can still use your Euro-plate, you just need to display a GB sticker without any reference to the EU.

This might be a cheaper option for you too. Halfords are selling them for just £2.39 instead of the £16 for a new number plate.

The current rules of British number plates in Europe

Under the current rules, a separate GB sticker isn’t required when travelling within the European Union if the Euro symbol and GB national identifier are displayed on the number plates.

The Euro symbol must be a minimum height of 98mm, have a width between 40 and 50mm, have a reflective blue background with 12 reflecting yellow stars, and must show GB in reflecting white or yellow.

Alternatively, drivers can display the Union Flag, Cross of St George, Cross of St Andrew or Red Dragon, but they must be accompanied by letters denoting the country of origin.

For example, in the case of Wales, the options are CYMRU, Cymru, CYM, Cym, Wales or WALES – in all cases, the plates must be accompanied by a GB sticker.

Struggling to get your head around all the changes Brexit may or may not bring? You’re not alone. We’ve pulled together a guide to driving in a post-Brexit world, it might be worth giving it a once over.