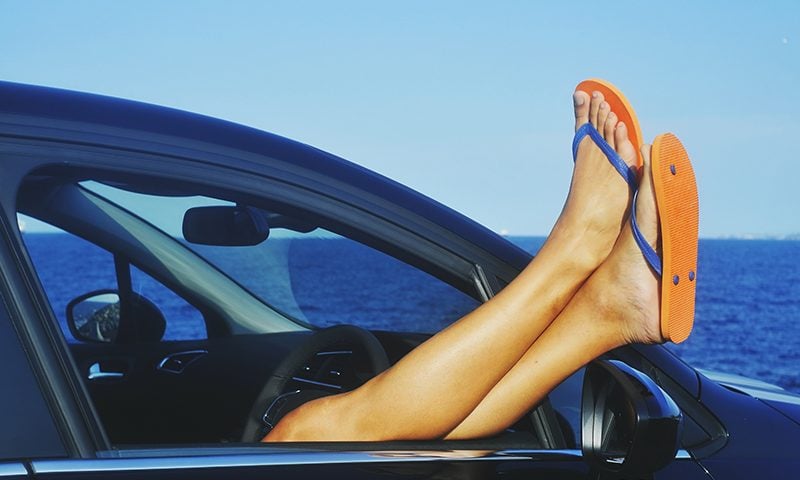 Summer’s well and truly in swing and many of us are enjoying the high temperatures by taking to the roads and heading off on a sunny adventure.

But, as inevitable as a rained-off barbecue, the hot weather also sees a number of summer driving myths doing the rounds on social media.

Here are our top 10 summer driving myths, and why they’re just not true…

Will filling up your tank make it explode?

Reports that drivers are risking exploding petrol tanks by filling up to the max appear online when the mercury rises, but they’re entirely false.

Today’s cars are designed to cope with any expansion of fuel, so there’s absolutely no risk of your tank exploding if you fill it to the brim on a sunny day.

Is it illegal to drive barefoot?

If you’re coming straight from the beach or the pool and your feet could be wet and a bit slippery, for example, you could be putting yourself and others at risk by not being able to drive safely. That is illegal, so be careful.

Does the heat mean you get less petrol for your money?

The old story goes that when the weather heats up, petrol expands, meaning you get less juice for your buck at the filling station. This leads to people heading down to forecourts before dawn to get the best deal.

This is simply not true. Petrol is stored underground where it’s cooler, so whatever time you decide to top up, you’ll be getting the same amount of fuel.

Is it OK to put water into the car radiator?

When summer hits, some people maintain that it’s fine to fill up your radiator with just plain old water and nothing else. But that is exactly what you shouldn’t be doing.

Coolant has important anti-corrosion properties that will help your cooling system, and if you’re diluting the coolant with water every time you top up your radiator, that could mean your coolant could freeze come winter. And that can lead to serious damage to your engine. Make sure you use a mix of both.

Does the sun wreck your interior?

This isn’t quite as cut and dry as the other myths on our list. Technically, if you live in a hot country and always park your car outside then yes, the sun may eventually do damage to your interior by fading the fabric and warping the plastic.

But if your hometown is more Aberdeen than Abu Dhabi, this is near on impossible. Not only will your car windows come with neat UV filters but, let’s be honest, our summers never get that hot, anyway!

Will hot roads ruin your tyres?

Yes, the rising temperatures coupled with speed and heat build-up can all come together to weaken tyres and result in worn damage or, at worst, a blowout. Tyres wear quicker in extremes of heat or cold.

Wet roads cool the tyres and reduce friction between the tread and the road, so wear is lessened compared to that of hot roads.

Can you get sunburn whilst driving?

Even though you’re behind glass when you drive, you can still get sunburned. Windows and windscreens will block some – not all – UVA and UVB radiation, which causes burning and increases your risk of developing skin cancer.

Always wear sun cream if you’re in a convertible (lucky you!) or you keep the windows open to cool down. If you burn easily or drive a lot, you should wear sun cream on a daily basis.

Is it OK to leave a dog in the car if it’s not sunny?

While it’s not illegal to leave your dog in a car, it is against the law to mistreat an animal in your care.

Many people believe it’s ok if you’re parked in the shade and the windows are left open but this is a myth. A car can become as hot as an oven very quickly, and a bearable 22 degrees outside can reach a shocking 47 degrees inside a car.

The Dogs Trust advice is never leave your dog in a parked car during the summer, even for a few minutes.

Does turning your heating on in your car cool down the engine?

Yes, this is true. Although it may make you hotter, if you feel it’s safe to do so then it does help cool the engine down.

Turn off your air conditioning and turn on the heater. This blows some excess heat from the engine into the car. Put your car in neutral or park and then rev the engine. This makes the fan and the water pump work faster, which pulls more air and more water through your car’s radiator. This increased circulation cools down the engine.

You can also pull over and open the bonnet. This releases the heat and lets air circulate through the hot engine. Just be careful when opening the bonnet—hot steam may come blasting out. Never attempt to remove the radiator cap in whilst the engine is hot!

Can you cook an egg on your car’s hot bonnet?

While in the height of British summer you might think when touching your car bonnet  ‘wow that’s hot enough to cook an egg’.

Well, the truth is unless you’re in temperatures like that of California’s Death valley, the likelihood is your egg won’t sizzle as you would expect!

Experiments of cars in temperatures of 35 degrees have shown that an egg won’t solidify and harden as any frying egg should.

Well, there you have it, 10 summer driving myths debunked! Now that’s cleared up, why don’t you take a look at our top tips for driving in hot weather.