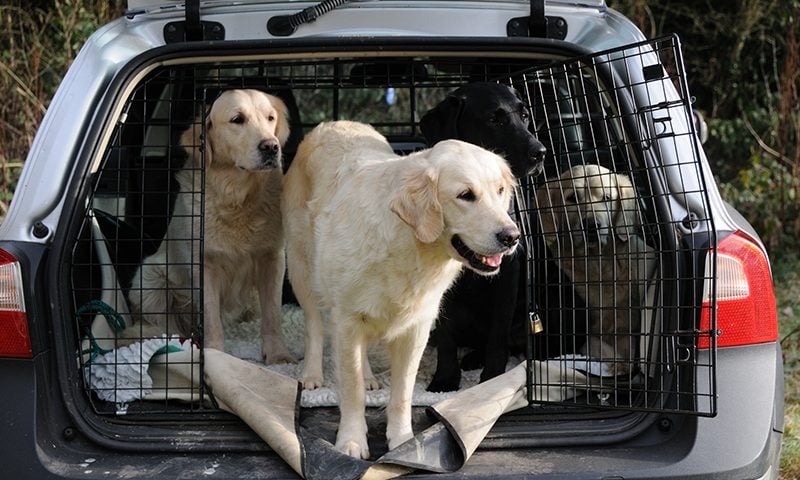 Do you pop your pooch in the passenger footwell when you take them out for a drive? Or maybe you let them ride shotgun so they can stick their head out of the window?

If you’ve answered yes to either of those, then take note of experts warning that failing to buckle down your pet could see you face hefty fines.

The warnings come after a study by Confused.com found that nearly two thirds (64%) of drivers don’t know that driving with an unrestrained pet could lead to fines of up to £5,000.

The study also found that almost half of drivers (48%) don’t know that driving with an unrestrained animal could potentially invalidate their insurance cover if they’re involved in an accident.

Driving without due care or attention

Although driving with an unrestrained pet isn’t technically against the law, it could see you accused of driving without due care or attention, an offence with a maximum fine of £5,000.

Loose pets can be dangerous if they panic or move around the car, which can cause distractions for the driver and interfere with the control of the vehicle, leading to dangers on the road.

A collision on the roads could also see unrestrained animals turn into dangerous projectiles in the car, causing injuries to themselves or other occupants.

The Highway Code states: “When in a vehicle make sure dogs or other animals are suitably restrained so they can’t distract you while you’re driving or injure you, or themselves, if you stop quickly.”

Amanda Stretton, Motoring Editor at Confused.com, led the warnings about the dangers of having unrestrained pets in the car.

She said: “Many drivers will be joined by four-legged companions as they set off on trips across the UK. But drivers must restrain their dogs properly, or they could receive fines up to £5,000.

“Driving with an unrestrained pet can also potentially invalidate your car insurance, meaning the driver would have to personally pay out for repairs in the event of a claim.”

When it comes to how to restrain animals properly, the Highway Code suggests using seatbelt harnesses, pet carriers, dog cages or dog guards to help keep you and your animal safe on the road.

Want to know more about driving with a dog in the car? We’ve got you covered.