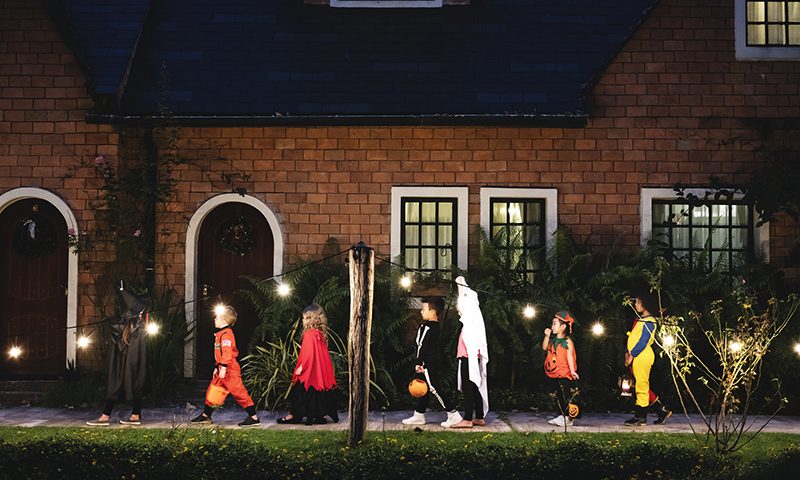 Are you heading out trick-or-treating with your little ones this Halloween? Perhaps you’re all dressing up as goblins or ghouls, or maybe your favourite Harry Potter characters?

Whatever costumes you’ve chosen, treat your children to some road safety advice before you head out — as new analysis shows a dramatic spike in the number of kids injured on the roads on 31st October.

Official figures show that twice as many under-10s are injured on the roads on Halloween than any other day in the surrounding four-week period.

And it’s not just Halloween when parents should keep a watchful eye on their children, either, as the data shows a second spike just a week later — on Guy Fawkes Night (5th November).

According to analysis by Churchill, an average of 49 child pedestrians are injured by vehicles every Halloween, a 75% increase on the rest of October.

The sheer number of children out on the streets on Halloween and the fact that the clocks have just gone back, meaning the days are shorter, combine to form a dangerous cocktail for trick-or-treating kids.

The analysis found that on a standard day nearly half (46%) of all child pedestrian collisions occur between 3pm and 6pm, but on 31st October this number drops to 31%.

This is because on Halloween children are out on the streets later, with 47% of child pedestrian collisions on Halloween taking place between 6pm and 9pm, a period which usually accounts for 18% of incidents.

Increased risk on the roads

Steve Barrett, Head of Churchill, said that while the overall number of collisions involving child pedestrians remains relatively low, there is an increased risk on both Halloween and Bonfire Night.

He said: “The dangerous combination of a higher number of children on the roads, poor lighting and the clocks going back three days before Halloween, means that drivers need to be extra vigilant this 31st October.

“Halloween is an exciting time for both children and parents, so we urge everybody to take extra care while trick-or-treating to avoid any accidents.”

If you’re getting behind the wheel this Halloween, make sure you remind yourself of how to stay safe on the roads by reading our top tips for driving in the dark.