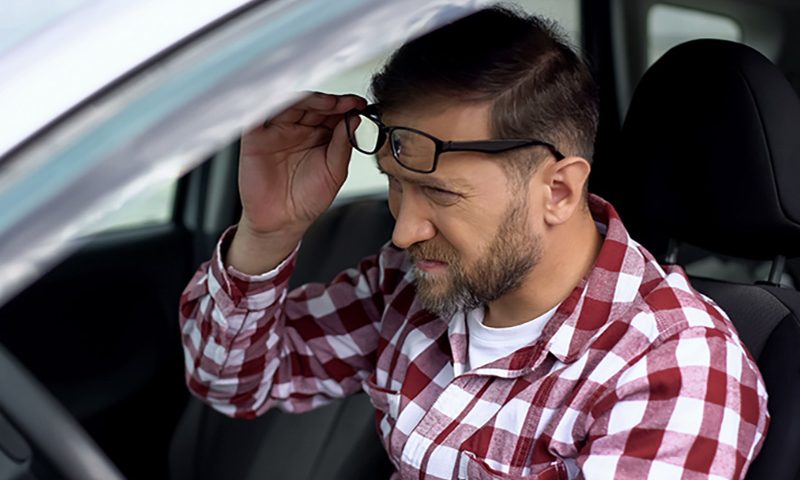 Do motorway gantry lights blur into one? Does that sign say 30 or 50? It might time to put on your specs…

A “concerning” new survey of optometrists has found that nearly half (44%) of drivers with glasses fail to wear their prescription lenses behind the wheel.

Up to a million drivers could be breaking the law, endangering road safety and running the risk of having their licence revoked if they fail to pass roadside tests.

Poor eyesight was the cause of almost 300 serious collisions over the last five years, with several resulting in fatal injuries.

Yet despite the risks, more than a fifth (21%) of drivers admit that road signs appear blurry while driving, while 27% find it difficult to see when driving at night.

Optegra eye surgeon, Shafiq Rehman, said: “This concerning data really worries me – that so many drivers are citing problems with their vision when driving.

“It is so, so vital that all drivers see well. As we have heard in the news recently, accidents can so easily happen”.

According to Direct Line which conducted the poll, 206 motorists were caught by police in roadside vision tests between January and September last year.

Optometrists are now calling for tougher enforcement to help ensure everyone’s safety on the roads.

A recent survey by Direct Line revealed 81% of people believe annual eye tests should be made compulsory for all drivers, whether or not they have a known condition.

According to the Highway Code, drivers must be able to read a vehicle number plate from a 20-metre distance in order to be considered safe behind the wheel.

Driving law also states that drivers who need to wear glasses must wear them at all times while driving.

“Eyesight can naturally deteriorate over time so anyone concerned about their eyesight should visit their optician – don’t wait for your next check-up.”

Drivers who are unable to complete standard roadside tests could have their licence revoked. It is advised that those with poor eyesight keep a spare set of specs in the glovebox to save them ever driving illegally.

Didn’t know about eyesight driving laws? Here are the 10 most common driving laws broken in the UK.