Driver stopped by police… for eating a bowl of cereal 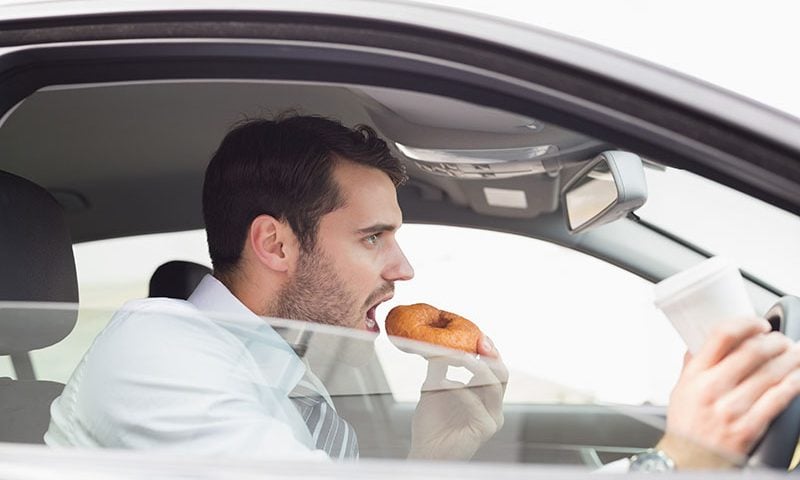 You had a late night. Your alarm didn’t go off. You’re in a rush. You know there’s going to be traffic. Who has time for breakfast?!

One driver in Manchester saved some time in his morning routine by eating his breakfast behind the wheel.

The motorist was stopped on Manchester Road in Hyde, Greater Manchester, and was reprimanded by the police for not being in proper control of his vehicle.

Cereal offender
This incident happened during a crackdown operation from Greater Manchester police. It’s part of a country-wide operation to try and stop drivers from using their mobile phones while driving.

In the first week of the crackdown, 142 drivers were stopped for using a phone. Four other drivers – including the motorist tucking into the most important meal of the day – were reprimanded for not having complete control of their vehicle.

This crackdown comes shortly after plans were announced to increase the penalties drivers will receive for using a phone behind the wheel.

From next year, drivers will get 6 points on their licence and a £200 fine if caught using a phone while driving. There are also plans to remove the remedial course that currently allows drivers to stop getting the points.

With almost half of motorists admitting to using a mobile phone while driving in the past year, these penalties and the current police crackdown aims to change attitudes and promote safer driving.

Delayed reactions
Research shows that using a mobile phone while driving slows your reaction time by 50%, and makes an accident 4 times as likely.

Greater Manchester police superintendent Craig Thompson said: “Last week was just the beginning of our focus on these offences over the coming weeks and sent a clear message to anyone using a mobile phone while driving – it will absolutely not be tolerated here in Greater Manchester and it must stop.”

There was no official statement from Greater Manchester police about the breakfast-eating driver.

But it’s safe to say eating cereal behind the wheel is a surefire way to say your ‘Cheerios’ to your licence.