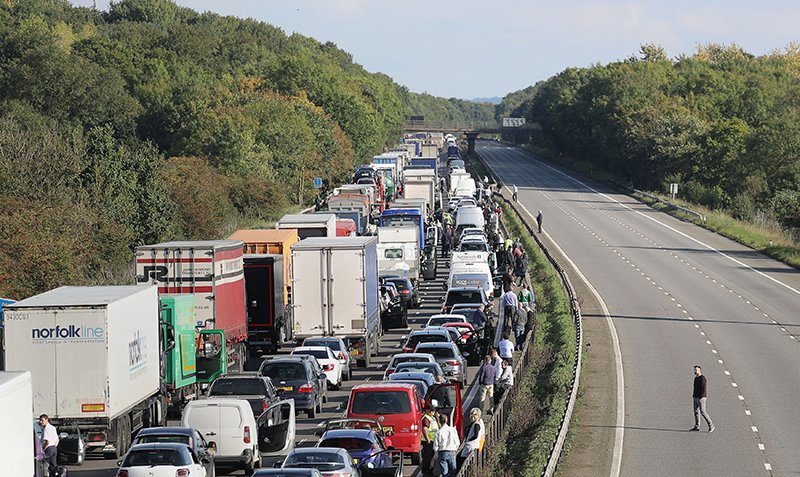 Getting stuck in a traffic jam is one of the biggest sources of frustration, stress and, let’s face it anger that a driver has to experience. But motorists trapped in nine-hour queues on the M1 have come up with a way to pass the time…

Drivers got so fed up waiting in an 11-mile tailback between Northampton and Milton Keynes, they got out of their cars and played football, rugby and Frisbee.

Police closed both directions of the busy motorway during rush hour, as they attended to a suspicious package at around 7.30am on Tuesday 19th September.

Images shared on social media show drivers having a kick about on the opposite empty lanes, as some made their way up the hard shoulder with suitcases in a desperate bid to catch a flight.

Tim Mayer, a Conservative councillor from Coventry who had been trapped in the long queues, said: “There’s a five-a-side football competition, a bit of rugby, a guy cycling up and down in the wrong direction.”

Former England Cricketer James Taylor shared a video on Twitter of one man using the time to practice his skateboarding technique.

Tim later joked: “Might get the clubs out – perfect driving range”.

Other motorists passed the time by socialising with fellow drivers.

Cllr Mayer added: “There are a few people with coffee in the car who have shared it around and others with some boiled sweets who have been generous.”

Eventually, a gap was cut into the central barriers to allow motorists to escape the tailbacks via Newport Pagnell services.

Police have confirmed chemical analysis is ongoing but say there are no explosives in the package that was found beneath a bridge.

As the queues ensured, Thames Valley Police Chief Inspector Mark Lewis said: “The object contains a highly corrosive material which has leaked across lanes one and two, therefore the clear up process will take a significant amount of time.”

The M1 northbound carriageway reopened at around 5.30pm, while the southbound lanes stayed closed until 10.30pm.

Protect yourself against motorway breakdowns with our comprehensive breakdown cover.