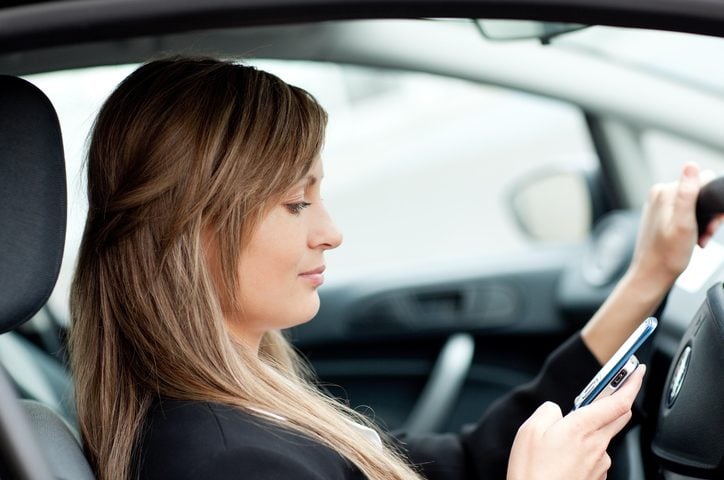 The penalties for using your phone while driving could soon get a whole lot more serious as the Government tries to make the dangerous habit as socially unacceptable as drink-driving.

Under new plans unveiled by the Department for Transport (DfT), motorists who call, text or use apps while driving will face a minimum fine of £200, up from £100.

The number of points you’ll get will increase too – up from three to six – meaning that new drivers will have their licence revoked, with young drivers losing the right to drive after a first offence.

Risk of being disqualified
New drivers who are disqualified have to pay for a new provisional licence and pass the theory and practical tests again to regain their full licence.

More experienced motorists can lose their licence if they accrue 12 penalty points within a three-year period.

Applying to England, Scotland and Wales, the new rules will also see these more experienced drivers going to court if they reoffend, with the possibility of being hit with a £1,000 fine and at least a six-month driving ban.

‘Untold misery’
It comes after figures from the DfT showed that a driver impaired or distracted by their phone was a contributory factor in 492 accidents in Britain in 2014, including 21 that were fatal and 84 classed as serious.

Transport Secretary Chris Grayling said that replying to a text or answering a call may seem harmless, but added that it could kill and lead to “untold misery” for others.

The penalties, which will come into force in 2017, are heavier than those proposed in a government consultation in December 2015, which suggested raising penalty points to just four and increasing fines to £150.

As technology has become more advanced over the last few years, with apps, emails and even cameras acting as a distraction to many drivers, there has been growing pressure for legislation to be tightened up to serve as a deterrent.

It is thought that drivers who use phones when they’re driving are much less aware of what’s going on around them, fail to see road signs and are more likely to tailgate the vehicle in front of them.

Using a hands-free device was also found to be just as distracting in research carried out by scientists at the University of Sussex.

The findings revealed that phone conversations cause drivers to visually imagine what they are talking about, a process which uses the same part of the brain that is employed to watch the road.