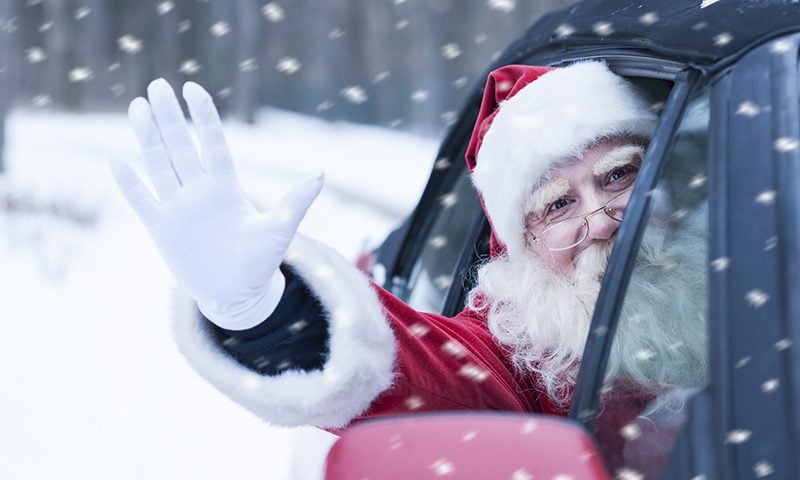 ‘It’s the Most Wonderful Time of the Year’ – but for poor old Father Christmas, it’s all work and no play.

This year he’s expected to visit 2.2 billion children in 9.16 million homes across the planet, travelling 424.84 million miles in a 32-hour window.

Research by TeamSport Indoor Karting has revealed that it would take Father Christmas over 693 years to do the journey if he left Rudolph and his pals at home and took his car.

This would be a journey that Father Christmas wouldn’t be able to take on by his lonesome, he’d have to have a load of little helpers behind the wheels of a whopping 189,662 cars travelling at least 70 mph to even contemplate achieving his once-a-year outing, and that’s without stopping to eat his cookies and milk.

There are potentially more fuel efficient ways of achieving his task – he could set off on bike, which would take roughly 2,109 years or walking at 12,125 years.

Needless to say, when you’ve got such a tight deadline, you might have to think more about your deadline than the environment – just this once at least.

That being said, even a Boeing 747 cruising at 550 mph wouldn’t be able to complete his Christmas Eve mission.

Staggeringly so, even at that speed, those born just after Father Christmas set off would be nearly 90 by the time he arrived, with the journey taking 88 years, and he’d need a fleet of at least 25,000 planes to be able to complete his Christmas Eve deliveries in time to make it back to the North Pole in time for dinner.

Dominic Gaynor, Managing Director of TeamSport Indoor Karting, commented: “Our research highlights just what an amazing job Father Christmas and his reindeer do to ensure every child receives their presents on Christmas morning.

“Our normal methods of transport simply can’t compare to the speed of his sleigh – it would take our 40 mph go-karts over 1,000 years to deliver the world’s presents.

If you’re going to be getting behind the wheel to head home for the holidays, we advise that you don’t try and imitate Father Christmas’ speeds behind the wheel, but we do suggest having a quick read of our guide on driving home for Christmas. It’s filled with everything you could need to make sure you’re able to achieve a stress-free journey home.